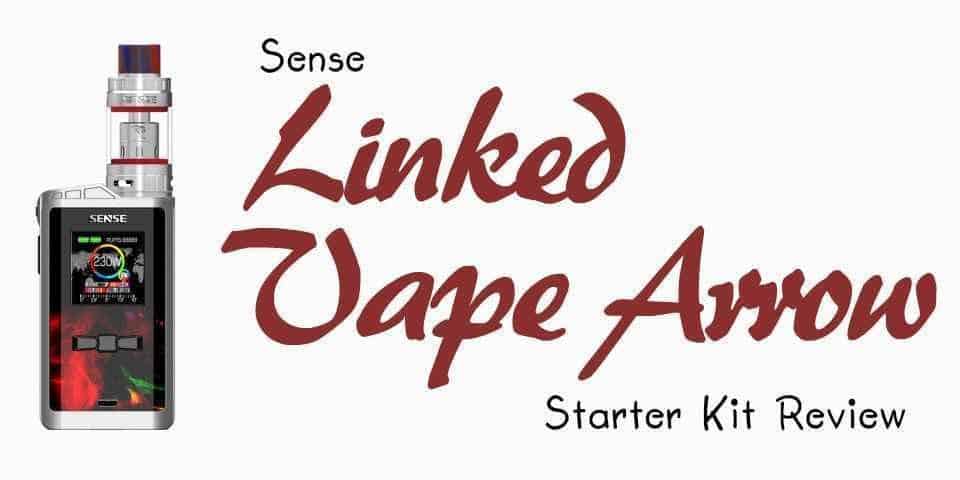 Finally Sense has released what is going to be known as their flagship box mod kit, the Sense Linked Vape Arrow with the Herakles 3 Sub-Ohm Tank. This starter kit is already starting to make even the most serious vapers sit up and take notice. So let’s take a closer look at this kit to see if it can compete as one of the best vape mod kits on the market.

Sense has decided to go with a traditional looking box mod with up to 230W powered by 2 18650 batteries, which let’s face it guys, is probably the best way to power a vape mod!

The mod itself is covered in a marble design with two initial colors available on the market, red and blue.

The mod is designed around the Cortex M4 chipset which is easy to navigate around the menu and has some pretty cool features like an led light display after pressing the power button. You can adjust this light display with over 30 different settings to choose from.

The color LED display on the front of the mod does cover everything you need to know like the wattage or temperature (depending on your mode), the resistance of the atomizer, individual battery indicators, and also a clock.

It has a nice oversized fire button on the side making it easy to find without having to look down and check which button to press! One thing we have to mention, and that’s the price. It’s really quite high for this mod, but a top tip is to look at our best vapes page as this mod and others like it often come up.

The mod has the ability to power from 7W to 230W as mentioned before but also has the option of operating in a number of different modes. These include your standard wattage and temperature modes, but also a TCR mode which is always nice to see.

The kit comes with the Herakles 3 Tank, which is really what most vapers know Sense for. It is a reliable tank and performs really well, not quite to the same standard as the top sub ohm tanks but not bad all the same. Coupled with this mod though, really brings this tank to a new level making some really deep and heavy favorable clouds! The tank is a top fill tank, operated by sliding the top cap to reveal the reservoir which can hold up to 4.5 ml of juice. They use the V-Jet Coils, which have been improved upon since the initial release.

Back to the mod, the core features are:

So starting with the 0.6-ohm coil and using around 60-70Watts let’s give it a try! The airflow is wide open and boy does this kit produce some serious vapour! The V Jet coils really do produce some good flavour and with the responsiveness of the Linked Vape Arrow mod there’s really not too much too complain about.

Overall the Sense Arrow Starter Kit is a great kit for beginners, not for those who are looking for best e cig to quit smoking with but for those who want a little more power. The tank is reliable with the V Jet coils which last about a month each. The dual battery mod running on a 0.4-ohm coil can last a long time running at around 60Watts. Personally, we love the mod but are a little underwhelmed with the tank. Stick a Smok TFV12 Prince tank on it and now you have something!