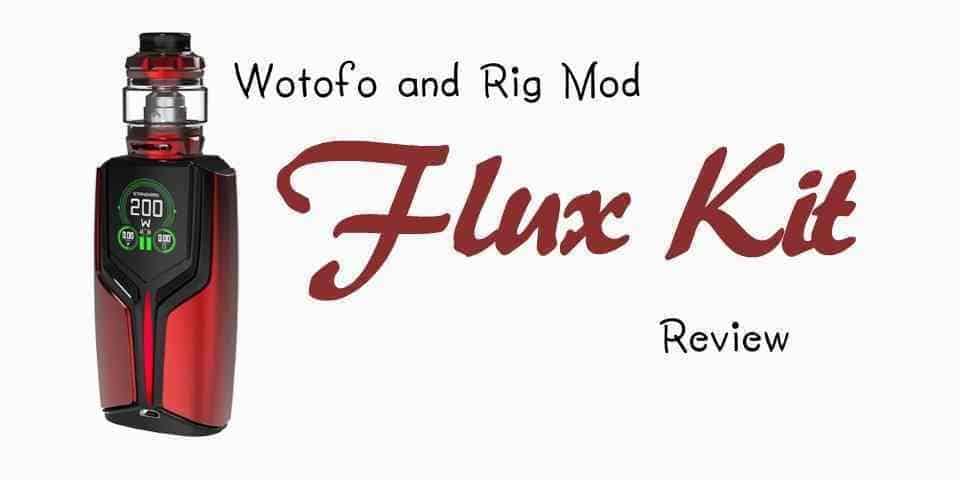 Wotofo has teamed up with Rig Mod to create a new 200W Mod kit with the Flow Pro Tank if you buy the kit version. So how does the Wotofo & Rig Mod Flux Kit compare with all the other best mod kits on the market? Let’s take a close look to see.

The design is rather striking with a Zinc alloy body, especially if you pick one of the bright colors, that said, the color does make a huge difference to the appearance and Wotofo are currently releasing 8 different color versions.  These include blue, rainbow, light blue, white, black, gunmetal, red and green, so plenty of choices there.

It features a nice OLED 1.3inch color screen which is bright and easy to read, housed on the front at the top of the mod. Below the screen to either side are the well-hidden up and down buttons that blend so well into the design. Below the buttons is a customizable light bar, with all types of modes like breathing, flashing etc. Which are activated when firing the mod or when the mod enters standby mode. You can, of course, turn the light display off if you prefer. Many of the newer and best e-cigarette manufacturers seem to be adding some kind of light display, not everyone’s happy but at least you can turn it off if you like!

Below the light display is where you find the USB port for firmware upgrades or battery charging. One thing you may find hard to find on the Flux mod is the actual fire button! Wotofo has created the fire button into the body of the mod, so it’s actually the complete side of the mod. Just squeeze the mod and you’ll feel it press.

The top of the mod has a 510 spring loaded tank thread, ideally positioned in the middle of the mod to create a balanced kit when the tank is on.

The 1.3 inch OLED screen features all the information you need, and as the Flux mod is just a wattage controlled device it’s really easy to use. The screen shows the current wattage in an enlarged font with the firing mode of Standard, Powerful or Powerful+ just above, this is the speed at which the mod will get to the desired wattage. Below the wattage display is the voltage when vaped, the resistance of the coil and 2 battery indicators, one for each battery.

To change the firing mode you hold the fire button and plus button together, you can scroll through Standard, Powerful or Powerful+ modes.

If you hold the up and down buttons together you can lock and unlock the device which includes the firing button. Holding the firing button and the minus button enters the display mode, where you can adjust the color and display of the light for both firing and standby.

Using 2×18650 batteries the Flux mod has adjustable wattage from 5-200W, and able to handle resistances of between 0.08-3ohm so it should suit most vapers.

The Flow Pro Tank is a 4ml sub-ohm tank, but it also comes with a bubble glass which increases the capacity to 5ml. It has a diameter of 25mm and is 41mm tall.

One unique quality of this tank is that the tank is compatible with SMOKs Baby Beast coils, so it opens up an array of choice if you don’t like the supplied coils. The tank does come with 2 coils, both are 0.18ohm and both are the mesh style.

The base features 3 airflow slits which are of course adjustable and also on a stopper. It is a top fill device, but it doesn’t actually show where you can slide the top cap, meaning it’s a little awkward and annoying to find!

Playing with the firing modes does make a difference with this kit, Powerful+ gets the coil hotter quicker, so we’re guessing it works similar to vape strength that we see on other mods. If you vape a lot or even one of those who claim they are addicted to vaping, then the Powerful+ mode is probably best.

With the supplied 0.18ohm coils we find that vaping around 40-50W is ideal, producing the best flavors, and thanks to the mesh design the flavor is actually really good, along with the cloud smoothness. But this has a lot to do with your e-liquid as well remember!

The Wotofo & Rig Mod Flux Kit is a really simple mod kit to use, mainly because it just uses wattage control. The Flow Pro tank is a decent sub-ohm tank and with the 0.18ohm mesh coils, it actually operated at lower than normal wattages, which is great and makes the mod last even longer until a recharge is needed.

Overall a really good performing mod, if you like the design, then chances are you’re going to love this mod, as long as your not into your temperature control vaping!