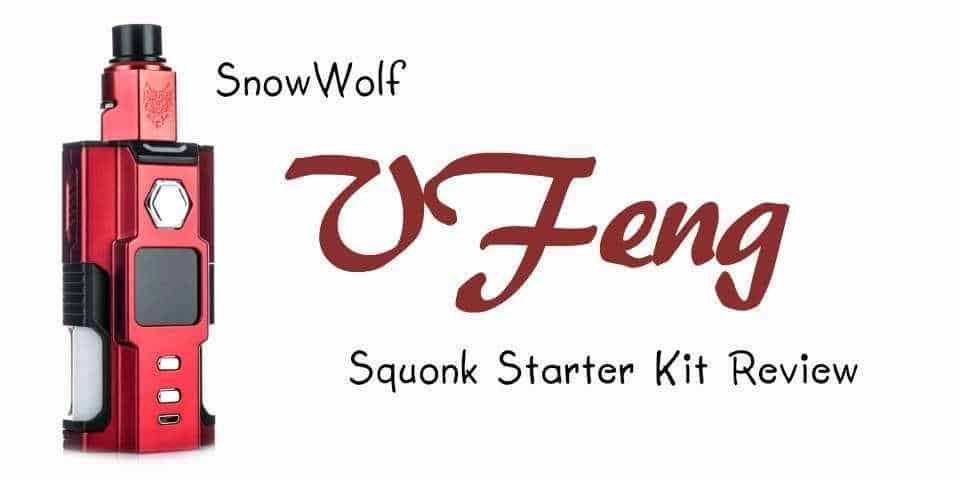 So we all know that Squonk mods are becoming more and more popular, although not to everyone’s taste. Nevertheless, most mod manufacturers are releasing their version of the squonk mod, which until now is pretty limited in design. SnowWolf, however, wanted to do something a little different incorporating a double squonk bottle where you can combine flavors and also powered the mod with a 21700 battery, extending the battery life somewhat.

But how does this new squonker compare with the rest, and have SnowWolf finally released a mod that’s worthy of the best vape mod crown? Let’s find out, shall we!

The VFeng mod houses a 21700 battery, but you can also use 20700 and with a use of an adaptor you can also use a regular 18650 battery. This has meant that the mod is slightly larger than other dual battery mods, but with the extra size, you get more!

The two squonk bottles are placed either side of the mod, making it relatively easy to squeeze and use, granted, it’s not going to win any awards for the best vape for its type as far as design is concerned, but it’s all functional, which is important.

There’s a big firing button in the center of the mod, a relatively small 1.3” screen and below that 2 menu buttons to adjust your settings.

The features and the design are exactly like the original VFeng, they have just converted it into a squonk mod. Ok, the Squonk mod version is slightly bigger by a few millimeters in both width and height, and the menu screen looks slightly different, but apart from that, it’s the same thing!

The two squonk bottles are held in place by 2 magnetic plastic housings that are easily removed to allow easy access to refilling. If your thinking of having 2 different flavors and switching throughout the day simply by squeezing just one bottle, forget it! It’s a lot easier to squeeze both bottles at the same time, but it’s good for combining flavors, and we found some pretty cool combinations which we would not have found otherwise!

The RDA has a pretty deep well to capture the juice, so that’s not too much of a problem, but bare in mind that this squonk mod only releases liquid to the well, not on top of the coils, so make sure they are well saturated before using this mod to avoid any burnt taste. You can learn more about the difference between RTA and RDA’s here, although remember, to use this mod as a squonker you need a squonk RDA too!

The RDA supplied with the kit holds 2 coils of your choice a relatively easy to build upon. The hexagonal shape of the RDA matches well to the rest of the mod. One thing we were slightly disappointed with was the lack of airflow. It’s ok, but there are better tanks on the market we feel.

The squonker works well, although it may be a little stiff at first, we also have to make sure all the tubes are clear after using real thick juice as this can block or even stop the liquid from reaching the RDA.

The tank performs really well, and depending on the coils you use can really bring the flavor of the juice out. These types of devices are probably not the best for performing vape tricks, but if you’re after a good tasting vape, with plenty of storage for your liquid, then they are ideal!

Glad to see SnowWolf bringing something slightly different to the market with the SnowWolf VFENG Squonk Starter Kit, just wish they designed the thing from the bottom up, instead of just modifying the original VFENG mod.

Nevertheless, a good squonk mod that is actually fun to use, especially when combining flavors. The mod performs pretty well, for a single battery mod, and the RTA brings good flavor to the party, so no real complaints.