Joyetech Exceed Edge All In One Starter Kit Review 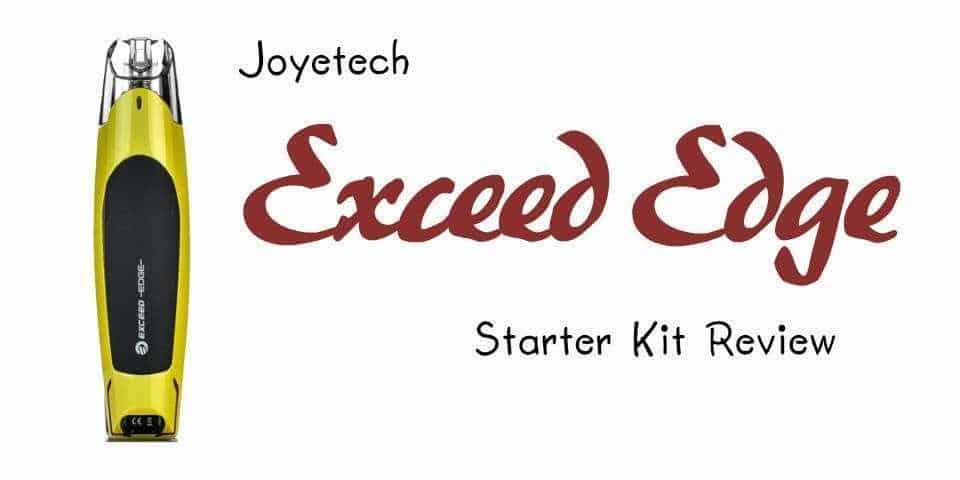 Joyetech were once considered the masters in the field of vaping, but over the last couple of years, manufacturers have gone from strength to strength improving their vaping products and sadly leaving Joyetech behind. Now with the pod systems coming more popular, Joyetech has released their Exceed Edge starter kit, hoping to once again take the crown as the best pod device. So let’s take a close look at the Exceed Edge to see how good it really is.

One thing is for sure, the Joyetech Exceed Edge does look really good! It has been ergonomically designed and based on the smooth lines of a sports car. Although many non-vapors automatically think it’s some kind of futuristic beard trimmer!

You have a number of different color options including, black, orange, red, yellow, silver or dazzling/rainbow.

The fire button is in the center of the device, making it easy to find, with the recharging USB port based at the bottom, and on top is the mouthpiece and pod. You can simply remove the pod by pulling it from the main body.

The pod itself has a 2ml e-liquid capacity and a nice removable rubber plug, so you can fill your tank with juice with relative ease and the plug also prevents any leakage when the e-cig is in action. You can use pretty much any juice you like, so take a look at the best e-liquids and decide for yourself! The base of the pod has a large screw thread cap, which you remove to insert your coil. Remember to prime your coil with e-liquid before use to avoid any of those dry hits and running your coil!

Measuring in at 110mm long, 26.5mm wide and 20mm depth, with a weight of just 74 grams, this pod system is smaller than you think and easily fits into your pocket without you even realizing it’s there!

Again Joyetech has kept things simple and use the common 5 click on and off feature. The Exceed Edge does have some led lights at the base of the unit to show when the pod is on.

The starter kit comes with 2 x Joyetech EX 1.2 ohm MTL (mouth to lung) Atomizer Heads, anything over 1-ohm is more suited to MTL. As this device is really suited to new vapers and ex-smokers, Joyetech decided to just include the MTL heads.

Joyetech has been in the game a long time, and the build quality of the Joyetech Exceed Edge is lovely, it feels nice, operates well and snaps together as you would expect any quality device to do. Because it’s been ergonomically designed the feel in your hand is great and the mouthpiece has also been designed with the thought of the user in mind. They are competing against the likes of the Juul pod but really the Exceed Edge is quite different and relatively larger.

The flavor on the Exceed Edge is actually really good, producing some good, smooth vape clouds, especially for an MTL device, but the airflow is not adjustable so will only suit those vapers who like the less restricted flow. That said, for new vapers, it’s probably set about right, but if your use to a smaller device with less airflow then it may take a little getting used to.

Joyetech has released the Exceed Edge as a pod system but with a huge difference, they actually contain a normal coil atomizer head which can be bought separately. Also, you can add the flavor you like with their refillable tank system.

The airflow on the device is less restrictive than other pods in the category, but the flavor and smooth clouds it creates is really pretty good. This device is certainly a decent contender as one of the best e-cigarette products in its class, if the airflow was adjustable it would possibly be number 1!

For a relatively cheap pod system, Joyetech has definitely hit the mark with the Exceed Edge, great job guys!