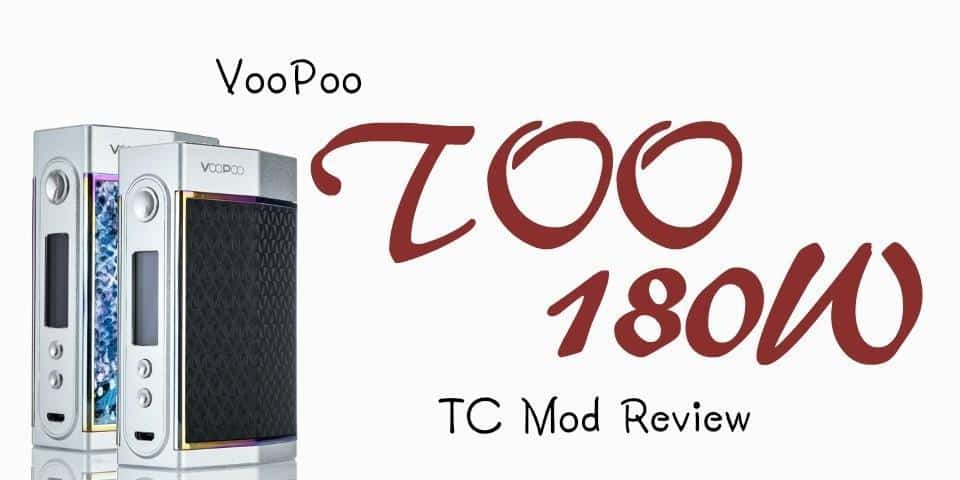 The VooPoo have released a new mod utilizing their successful Gene chipset and the ability to interchange between a single 18650 battery and dual battery function. We take a close look at the new features available and see if it competes in the battle to produce the best vape mod.

VooPoo has tried something new with the design of the VooPoo Too. They have removable stylish sides or doors available in 4 different patterns so you can ultimately change the look of the mod depending on your mood!

The doors slide on and off with relative ease and we enjoyed just fidgeting with the doors, it’s kinda like its own fidget gadget!

What’s different about the VooPoo TOO Mod is that it can hold either one or two 18650 batteries, the difference is that with one battery it can reach up to 80W and with two it reaches 180 Watts. Obviously, the battery life is limited to just the one battery installed.

Along with the updated GENE Chipset, the original we found on the Voopoo Drag, this mod is known to be one of the fastest firing mods on the market, no waiting for that vape, just press the fire button and 10 milliseconds later your vaping baby! This chipset is also recorded as being precise with a 0.1% accuracy score. This is pretty unheard of, but as mods improve over time we will undoubtedly see more companies achieving this goal.

On the side is the firing button, not as big as many, but it’s easy to find in the dark, also has an OLED screen and a plus and minus button to adjust wattage. It also has a USB port and supports USB charging with a whole host of safety protection like reverse charging protection, short circuit, over time, over temperature protection etc.  The top of the mod has the 510 spring loaded connection to fit the majority of tanks.

Clicking the button 5 times turns the mod on and on the OLED display you can see the battery life of each 18650 battery, resistance, voltage, and vape timer. The Nice bright screen that dims when you’re not using it. 3 clicks of the button allow you to enter the menu and change things like wattage to temperature control etc.

It also has a custom power setting, where you can adjust the power for each second the fire button is pressed. Pretty cool feature!

When you install a tank it will ask you if it’s a new coil. If you select yes it does for some reason reset all your settings!

The original Gene chipset was awesome, but this upgraded version is nothing short of perfection. Firing this mod is so responsive that you get that full vape experience quicker and easier. Depending on the tank and coils you use this box mod is going to deliver the best vaping experience, as long as you set it up correctly. Is it a mod or e cig to help quit smoking, well it can be, but a bit of experience is really needed in order to set it up to suit.

For the higher wattage vapers, it has a SOFT mode, this protects the coil from burning by creating a pulsing fire, i.e. instead of a consistent wattage, it turns on and off at that wattage to create a softer and smoother vape.

We were so impressed with this mod that if you can grab it cheap then you should grasp with both hands! Take a look at our list of best vapes, as this and many mods like it come up on top!

The Not So Good

Huge clouds, tasty clouds, and quick clouds, what more could you ask for! The only real 3 downsides are:

The actual operation of the VooPoo TOO Box Mod can’t be complained about and is right up there as one of the best, so responsive and accurate we were so happy with the performance. Custom power curves allow you to customize your vape even further and for the higher wattage users, the Soft mode makes the vape more tolerable and smoother. If you like the look of this mod, you’re going to love this mod all round!