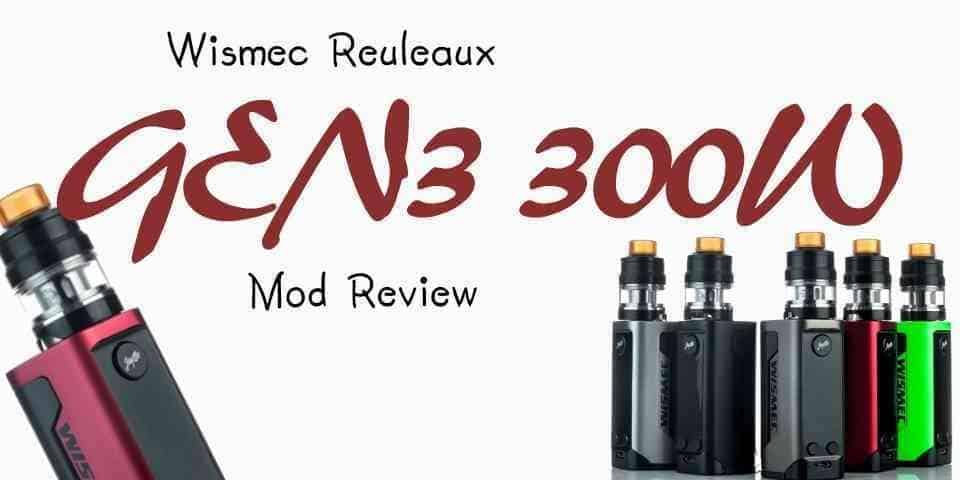 If you’re familiar with Wismec, then you know that the company produces vaping products that generally receive outstanding reviews from users. It would be easy for a company like that to rest on its laurels and just keep churning out the same offerings time and again, but that’s apparently not the Wismec way. Instead, this company keeps pushing the envelope, offering new innovations every chance it gets and thus producing some of the best vape mods you see in the market. In this Wismec Reuleaux GEN3 300W Review, we’ll see if they managed to accomplish that goal yet again.

But, Wismec has now released a new model known as the Wismec Reuleaux Tinker Kit which is another improved box mod kit, with a tank using mesh coils.

Most Wismec fans love the company’s consistency. It reliably comes out with mods that have the same basic shape (a triangle wedge), tremendous heft, and similar space-age graphics. Few users would expect that this pattern would change in any way – but the Wismec Reuleaux GEN3 300W does depart from that established routine. We’ll examine how it’s different before delving into its great features.

First, this is a smaller product than most of the Wismec offerings. As a result, it has a slimmer design and feels a lot less bulky in the hand. Yes, it still has some heft, but its weight matches its size in every way that matters, making it a true pleasure to hold. That compact size might frighten some Wismec users away since they will wonder how something that small could possibly provide a full 300 watts of power output.

Rest assured, it does produce that power. The device is powered by a total of three – count them, three – 18650 batteries, make sure you get the best 18650 batteries suitable for this device. Yes, we understand that even that may seem insufficient for providing that level of power output. However, in our tests, we had no problems achieving that level on a consistent basis. The design of the Rouleaux mod somehow makes it all work.

The device comes with a large 1.3-inch display that provides information about wattage and voltage, coil resistance, battery levels, and temperature. There is even a puff counter that you can access to see how many draws you’re taking on a regular basis. You can also use that display to access important device settings to view information about your mode usage, and change things like temperature control, wattage, and so on.

I was asked recently about the dangers associated with some of these higher wattage vaping devices, we actually covered this topic in our truth about vaping explosions article. At the end of the day, 300 watts is really high and can be unsafe. However, it looks like Wismec has done everything that it needs to do to ensure that this device is as safe as any other. That display screen can provide information about important safety concerns, and the device provides all the safety protections needed to protect itself and those who use it.

One concern that many users have with high-wattage devices is the amount of heat that they generate. That’s a valid worry since some units have been known to get hot when the wattage is cranked up. In our tests, however, we found no such problems with the Wismec Reuleaux GEN3 300W. Of course, the device did get warmer as we approached those higher wattage levels, but we were pleased to see that no part of it ever got hot. We were still able to comfortably hold it in our hands and vape to your heart’s delight.

And about that vaping: suffice it to say that there’s a reason cloud-chasers want more power from their devices. This Wismec mod was able to provide us with all the power we needed to create truly incredible clouds of rich, warm vapor. As you might imagine, we were so impressed that we couldn’t resist the urge to begin an impromptu cloud contest – which I lost, but only because I had to take a call.

Ok, it’s not going to suit everyone. If your looking for an e-cig to quit smoking with, then this is probably going to be a little too powerful and over-the-top for you. If on the other hand you have tried other vape products and really disappointed with vapor or flavor volumes, or an experienced vaper, then this vape mod is definitely one for you to check out!

Seriously, though, this is one powerful and efficient device. More importantly, it does the rest of its line proud by living up to Wismec’s well-established standards. Doubters are warned; this is one product that’s ready, willing, and able to prove you wrong, making it one of the best vaping products on the market!

Everything about this device feels right. The temperature control is a dream, and switching between coil types couldn’t be any easier. In TC mode, we enjoyed pure flavor using a mix of stainless steel coils and nickel coils. We even tested the temp settings, taking it all the way to the maximum 600-degree mark, and the device performed like a champ throughout the entire process.

Even skeptics will find little to dislike about the Wismec Reuleaux GEN3 300W. It’s attractive, compact, and high-performing in every way that matters. As a result of those benefits and features, we highly recommend it to vaping enthusiasts who are on the lookout for a great, reliable new mod.