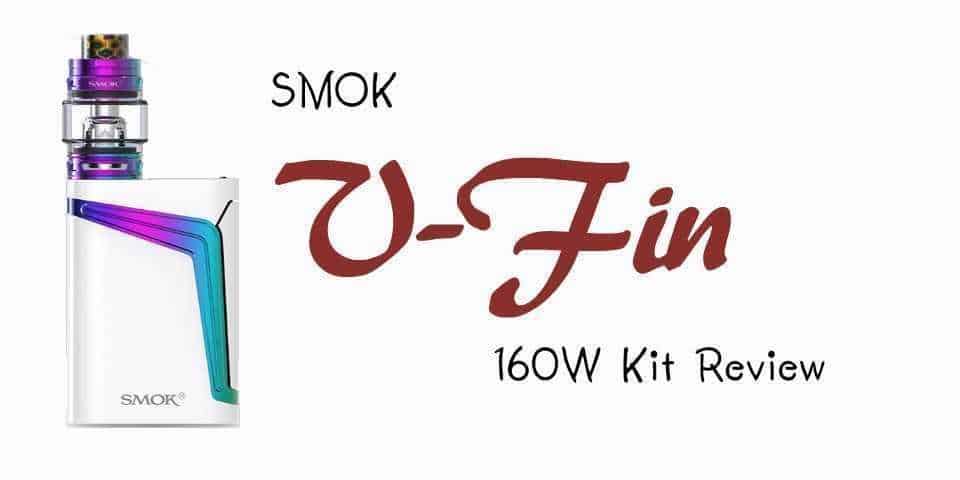 Yes, it’s been a couple of weeks so it must be time for another SMOK release! That’s right, SMOK have released another box mod kit known as the SMOK V-FIN which in kit format includes the TFV12 Big Baby Prince Tank. So how does this mod kit compare with their other models and should you rush out and get on? Let’s take a look to see if it’s one of the best vape mods!

The new design is a bit on the bulky side, but with a built-in and huge 8000mAh battery to house, it’s no wonder. With that in mind, the actual mod is not as big measuring in at 85mm tall and 56mm wide with a depth of 31.5mm.

SMOK have implemented an HD OLED screen into the V-Fin which is really well laid out. You can read the current power, voltage, mode, battery life, resistance, current, puff counter, temperature and working mode all from the home screen, without it looking overcrowded or confusing.

SMOK have also included the huge sidebar firing button, which let’s face it, is awesome, so we’re really pleased to still see it there! The USB port to charge the mod is found on the side at the top with ventilation holes for the battery found at the bottom.

A little surprised not to see a spring loaded 510 thread, instead they have gone with a non-reinforced pin, but still using the 510 thread. This may be an issue for certain tanks.

SMOK are releasing a kit version of the V-FIN and with that, you get the TFV12 Big Baby Prince Tank which has a 6ml capacity unless you’re in the EU in which case complying with the TPD you get a 2ml tank.

There’s really not too much to complain about with the TFV12 Big Baby Prince Tank, it uses the famous top fill design seen on other tanks, but SMOK have been slightly tweaking their successful TFV tanks for a few years now, it’s solid, creates beautiful clouds and is one of the best sub-ohm tanks on the market.

As we said before the V-Fin holds a built-in 8000mAh battery, which if your new to vaping, is just huge! It has a power range of 6W to 160W so should suit the majority of power vapers and a temperature range of 200-600 degrees Fahrenheit (100-315 degrees Celcius) for those temperature control buffs out there!

The resistance range is from 0.1 – 3.0-ohms so this mod can be used for both mouth to lung and direct lung inhale designed atomizers or tanks.

With the TFV12 Big Baby Prince Tank, you know already the V-Fin mod kit is going to perform really well. The flavor is great, pretty much instant and competes with the best e-cigarettes.

Vaping with the T8 coil at around 50W leaves you wanting more with the airflow wide open. It’s actually good practice to start low to give the coil time to prime up correctly.

Turning the wattage to 60W you really start feeling the smooth clouds, it’s a pretty responsive mod so there’s no hanging around waiting for the build-up of vapor! We found the sweet spot to be around 60-70W depending on how old the coils are, but as far as performance is concerned, nothing to complain about. We also didn’t get a single dry hit, as we would expect from the Baby Prince tank!

There is one big selling point with the SMOK V-FIN 160W Kit and that’s the huge 8000mAh battery, this beast is easily going to last all day at least, even with the heaviest of vapers.

If you’re happy with dual 18650 mods and they last the day, then this mod probably isn’t for you, also if your looking at the best e-cigs to quit smoking with, again not really for you. If however, you’re tired of carrying spare batteries around with you and don’t mind the slightly bigger size mod, then the V-Fin is going to be right up your street!