Where Is The Vaping Industry Heading 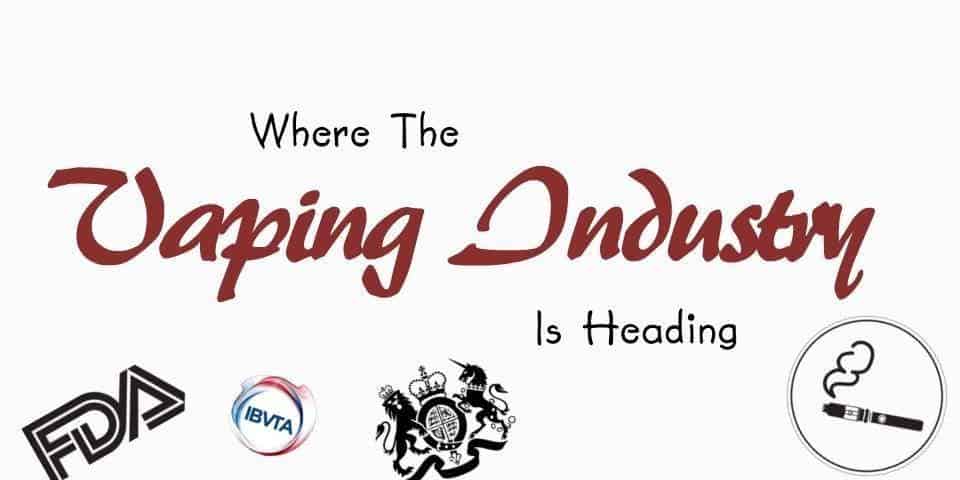 2017 and the years ahead seem to be quite unpredictable for the vaping industry, with numerous changes made in 2016 begin to be fully implemented this year. The changes touch on the use and sale of the e-cigarettes – affecting both the consumers and retailers. We have seem a huge influx of e-cig, vape pens, and box mod released in the last few months, but as these changes are made, does that mean that the innovation will slow or even stop?

To some extent, the future of the vaping industry in the US, and ultimately the world, is dependent on the new administration. The current indications are that Mr. Trump has some big things for the vapers. There are high chances that he might be good for the business and industry.

The e-liquid companies are optimistic about the new administration due to its plans to instigate a series of reforms to the FDA. The reforms already favor Big Pharma, letting the corporations to be in charge of the drug prices. The e-cigarette community is hopeful that with such reforms, these multinational companies will be distracted from the vape industry that has been blamed for a decrease in the Big Pharma’s smoking cessation.

Trump has already announced a plan that would reduce drug prices, lower the pharmaceutical companies tax payments, establish a competitive drug market and more importantly – eradicate a good number of regulations. Only time will tell if the regulations reform touches on the FDA’s e-cigarette regulation.

If that is the case, you never know, we may soon have a situation where vapers and the FDA co-exist peacefully.

Public Health Wales has been constantly entangled in a war against vaping, proposing the public health bill that would have banned vaping in places where food is served, public transport vehicles, educational institutions and transport hubs like train and bus stations.

The bill turned political and was ultimately watered down. But the regulatory body didn’t stop there and its latest call is to ban the sweet-flavored e-cigarettes in Wales. It recommends that all e-cigarettes should be given an advertising blackout on any media regularly viewed by children. This ban prompted the Independent British Vape Trade Association (IBVTA) into action, and they wrote a response to the regulatory bill.

Whether vaping is bad for your health is a question that has been subject to debate in most quarters. One thing we should understand is that we cannot compare vaping to clean air. Instead, the comparison should be between vaping and smoking – what ideally most vapers did before they began vaping. In any case, without vaping, then most vapers would be smoking. It is basically an alternative to smoking. The practice may not be that healthy for your lungs but its effects are far much lesser compared to what smoking would do.

Researchers are yet to gather evidence that vaping harms bystanders when exposed to the vapors. Public Health England published an independent review in which the body concluded that there isn’t any evidence indicating e-cigarettes are as harmful and are in fact at least 95% safer than regular cigarettes. If you’re looking for an electronic cigarette to quit smoking then check out our guide, which should help.

The future looks brighter in some areas, with the Bristol local council taking a proactive initiative to brand vaping a healthier alternative to smoking. Council workers spent their National Stop Smoking Day in local e-cigs, making demonstrations on how vaping differs from smoking by cutting down on the carbon monoxide.

Soon enough, more countries may follow and market vaping as the perfect alternative. Such a step would be significant to the growth of vaping industry.

One thing that blocks the growth of the vaping industry in some corners of the world, is the lack of accurate vaping information. For instance, the European Union instigated a set of regulations under Article 20 – the Tobacco Products Directive – which upon implementation brought on board the vapers and vaping business owners despite the fact that e-cigarettes have no tobacco.

The regulations limit the size of the e-liquid containers – must be 10ml or less and should not surpass 20mg. This closes all the avenues via which vapers can get bigger tanks for more juice.

The regulations are also beneficial when it comes to the safety of vapers as it requires that all bottles be made child-proof.

There have been reports that the regulations could ultimately cause an end to the vaping industries since small-scale businesses are said to have been harshly affected. But I don’t think that will happen. Vaping businesses are brilliant enough and can plan ahead of the changes so as to take them in their stride.

When e-cig began some years ago, after being invented in 2003 by a Chinese pharmacist who had lost his father to lung cancer, the future looked brighter. Startup costs were far much lower than we see today and consumers quickly jumped. Regulations were non-existent in an industry that is now entangled in a series of legal battles. A good number of smokers try e-cigs only once and then abandon it for lack of equal level of taste. The trial is high, and so is the rejection, making most analysts doubt whether the e-cigarette market can grow at all.

No doubt the industry has seen some huge changes and many manufacturers have released a huge number of alternative products before these regulations come into play. We expect that the number of devices will change over the next few months, not to improve the product, but to be in line with the law. That is until the regulatory offices become more familiar with the products and adjust the regulations to suit. Make sure you continue to read our reviews where we will guide you on the best electronic cigarette products, and clearly differentiate if the new models improve the vaping experience or are released just to comply with the law.