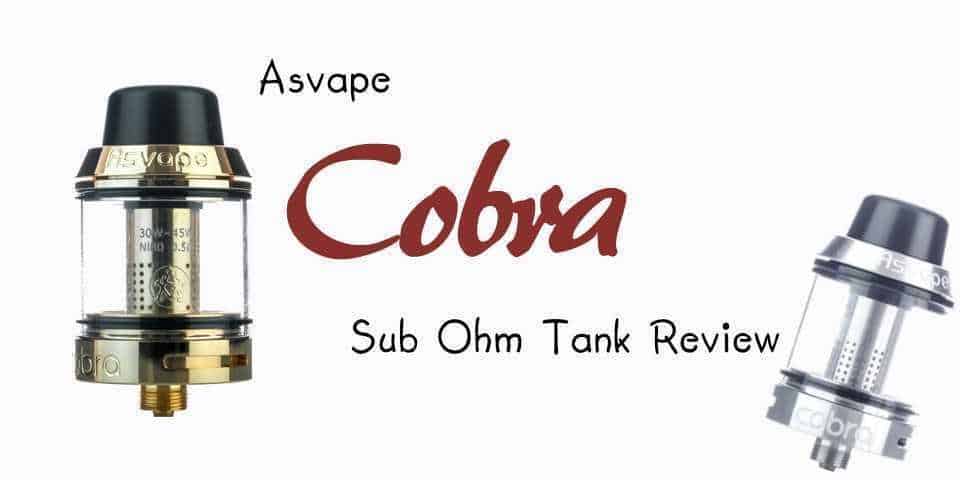 Asvape has now introduced a new 3.8ml Sub-ohm tank to the market, but is this market already overcrowded or do Asvape really deserve their spot in the competitive market. The new Cobra tank is their attempt to not just compete but to excel and become one of the top 5 sub ohm tanks, so let’s take a close look at this tank to see how good it really is.

Sporting a traditional sub-ohm tank look, the Cobra really doesn’t stand out that much, measuring in at 24mm(D)x42.5mm(L) it’s a bit on the small side, especially considering it holds a rather impressive 3.8ml of juice.

It is using the usual 510 thread, so you will be able to use this with pretty much all the best vape mods around, which you would expect and it also uses a Pyrex glass and food grade stainless steel to complete the design.

Apart from the slightly smaller mouthpiece, there’s really nothing to differentiate this from any other tank on the market, which might be a good thing, but if you’re a little more flamboyant and want to stand out from the crowd, then this tank is not for you. That said, if you like the traditional look, then read on!

The Asvape Cobra tank includes two 0.5-ohm Ni80 (Nichrome) coil heads with the kit. These coils have been rated to be used at around 30-45Watts, so this tank will work well on pretty much any mod, even the single battery, slightly less powerful mods.

The 3.8ml tank is utilizing the top fill functionality, again this is seen in pretty much all tanks these days, and all the best electronic cigarettes, you simply unscrew the top piece to fill up your juice.  Luckily they incorporated 2 holes to allow the air to escape whilst filling and it doesn’t matter which hole you use.

Here’s where Asvape have changed things a little and some might say the most important area, the coils. The first inspection of the Cobra coils shows that instead of 4 large wicking holes, Asvape has used hundreds of small holes to saturate the cotton evenly.

It’s been designed this way to incorporate all the juice concentrations all the way up to 80/20 VG/PG, so if your using juice on the higher VG levels, then these coils can cope.

Although the kit comes with 2 x 0.5-ohm Ni80 coils, there are some 0.2 SS316L (stainless steel) coils available to which you will have to buy separately and usually come in packs of 5.

The Asvape Cobra Sub-Ohm Tank has been built with flavor in mind, and to be perfectly honest we were super impressed with the flavor and clouds produced, we weren’t really expecting it and the flavor came through pretty much straight away. Usually, after priming, new coils take a little time to settle in, but the Cobra coils were pretty much instant. If you want to get this tank at a great price, then be sure to check out our vape deals area, we often see the Cobra tank in the sales and we will publish it first!

Vaping the 0.5-ohm coils at around 40W with a 70/30 Pg/VG juice creates a really good vape and in our opinion actually performs a little better than the Smok Prince tank, which is one of the best tanks on the market. Super happy with the performance of this tank, it’s definitely one to consider.

Initially, you might think that the Asvape Cobra Sub-Ohm tank is just your regular tank released on the market, but this little tank performs so well that we can only congratulate Asvape on doing a great job.

Not sure if it’s the new design of the coils that produce the deep flavor, but you can expect the vape to be good. Granted, it’s not going to compete on flavor against the RDA’s or RTA’s but it’s pretty close. The only downside is the relatively small capacity at 3.8ml, which doesn’t last long, but if this is part of the design to reduce the whole size and create a better flavor, then we are happy with that.

Overall a great sub-ohm tank that not only competes with the top tanks on the market but beats them in flavor!