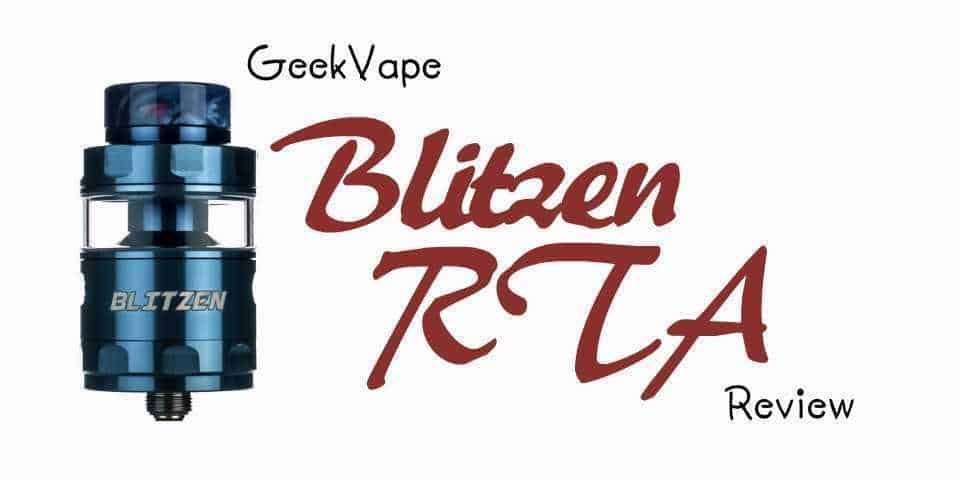 The new Blitzen RTA from GeekVape has been designed to maximize the flavor of your juice using side airflows that flow directly to the coils. But does this RTA actually work well and how does it compare with the best RTA’s on the market? Let’s take a look, shall we?!

Well right out the packaging this RTA looks really good, with 2 optional glass housings, one straight and one bubble design. The bubble glass increases the capacity from 2ml to 5ml, so it’s really worth using it!

The 25mm diameter makes it compatible with all the best box mods out there and is one of the most popular sizes for tanks. Measuring just 36mm tall would make this a similar size to SMOK’s prince tanks, but the 6mm drip tip makes it an overall size smaller.

The chimney on this RTA looks pretty big, but as GeekVape are trying to get the most out of flavor, the aligning of the air holes to the coils are slightly higher, so the chimney has to be of this size. It doesn’t make any difference as far as the aesthetics are concerned though, it looks great!

One thing that is noticeable is the weight of this RTA tank, there’s a lot of metal on the GeekVape Blitzen to accomplish their design goals.

If your a little unsure about RTA’s then take a read of our guide that compares RDA’s to RTA’s and gives you a quick explanation of both, it should help.

Here’s where GeekVape has changed things up a bit, the Blitzen doesn’t have any posts to screw the coils too! Instead, their design actually has the coil clamps built into the base unit. It also has 2 slots for the excess cotton to be folded into. This design, on paper, makes you think it will be pretty easy to build on and with the dedicated slots, it’s hard to get it wrong with too much or too little cotton.

The reality is though, we found it pretty tricky to get the coil height just right, there is a bit of trial and error, we had particular problems with the coils actually hitting the inside of the chimney.

This isn’t a huge problem and certainly shouldn’t put you off, it’s just problems you might encounter when you build your first deck. Once you get the idea, the build should be pretty simple!

Well, the airflow is huge, which is great. You can adjust it to your exact requirement, but how does the flavor taste?

The flavor all depends on coil placement! The higher up you get it, without touching anything the better the flavor, and boy when you get it right this RTA is going to rock your world and comparable with all the best electronic cigarette products! The airflow directly onto the coils really produces a magnified taste. GeekVape has figured this out and with the Blitzen, you get an RTA that can handle most coils and get the most from your juice. We just have to reinstate the importance of getting those coils high up on the deck!

If you build the deck on the GeekVape Blitzen RTA correctly you are going to experience some awesome flavors. Yes, it does take a little playing with to get it exactly right, so we would recommend using this RTA with a regulated mod. You don’t want any accidents if your coils are too high and shorting out!

The airflow is amazing, huge in fact, more than we could handle, but we’d rather too much than too little.

For the price, this RTA is one of the better designs out there and belongs on the list of the best RTA’s, but probably more suited to the experienced vaper who doesn’t mind so much about playing around with the build to get the sweet spot.