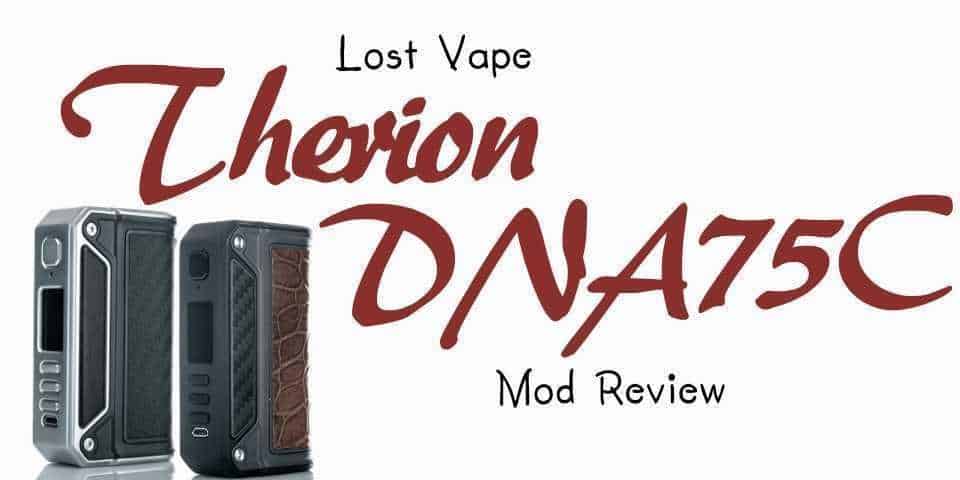 If you’ve been sitting around wondering what Lost Vape has been up to, wonder no more. The company has come out with its reinvented Therion mod and seems ready to take the vaping world by storm. And when we say that, we mean precisely that: this mod appears to be poised to change how we view box mods forever. But is all that hype accurate? Can any new mod truly revolutionize the way we think about vaping technology and all that it can accomplish? In this Lost Vape Therion DNA 75C review, we’ll take a look at this latest entry into the vape mod marketplace, and try to answer those questions.

Let’s get one thing out of the way right off the bat: this is a pricey device in comparison to something like the Smok Procolor Mod for example. It’s being sold at just under $150 unless you get an awesome deal like those we show above! But this puts it at the upper end of mod pricing – and may just be enough to deter many people from giving it a try. But here’s the thing you need to know about the Therion: this is not just another run-of-the-mill, factory-manufactured, ticky-tacky little box mod. When you buy one, you will be getting a mod that is unlike any other mod on the market – including other Therion mods.

Yes, each of these devices is unique, with its own unique finish that makes it anything but identical to its peers. In effect, you are buying a one-of-a-kind vaping device that could easily pass for a technological work of art. In other words, there’s something special about this product – special enough to warrant true aesthetic individuality. This mod and many like it come up for sale all the time, so be sure to check out our vaping deals page to see.

But here’s the question you’ll probably ask – is that unique finish enough to justify that price? Honestly, the answer is probably a simple no. Fortunately, however, there’s more to this product than a snazzy finish. For while many other lower cost mods contain many of the same features Lost Vape piled into this device, this product is in another category altogether.

One note: Lost vape was so impressed with this model they created a squonk mod model, which runs on one 18650 battery and has the bottom fed bottle in place of the other battery! This model is known as the Lost Vape Therion BF DNA 75C, the BF standing bottom fed! Obviously, the same features but running off just one 18650 battery limits the battery life.

What do I mean by features? Well, the Therion mod is built around the Evolv DNA board, which makes maximum use of the innovative eScribe software. That software allows maximum customization for devices that use it – enabling you to make your Therion operate according to your wishes. That’s a true game-changer in the competition for the best vape since it provides the user with the power he needs to make the machine learn his wishes – rather than adapting to the tech’s limitations. It’s about time this became a reality, right?

As for performance, it’s all that you would expect from a company like Lost Vape. It uses two parallel 18650 batteries, which can be charged via the mini-USB port or externally. Those batteries give the device up to 75 watts of power, which can be directed to variable wattage or temperature control mode. We’re big fans of the 18650 batteries, so their inclusion in this design is a major plus. Now, 75W doesn’t sound like much, but with dual batteries, this mod is going to last so a big thumbs up on a vape mod you can use all day.

That 75w limitation might be the only thing that some users fail to get excited about.  After all, the previous version of the Therion was rated at nearly twice that wattage, which makes this feel like a step backward. To be fair, though, I seldom used my old Therion at anything approaching that wattage level, so it’s not a huge concern from my perspective. I recognize, however, that other users will be hesitant to shell out this kind of money for a device that is less powerful than its predecessor, and that’s too bad.

Many vapers switch to mechanical mods to get better performance, but the Lost Vape Therion 75C does deliver an awesome vape, it performed well in all our tests. Wattage was reliable and consistent, and we were able to use the mod with a number of different tanks and RDAs – something that always appeals to most of our test group. It is important to note, though, that this beautiful device doesn’t really do anything that other 75 watt mods can’t do. Its only real performance advantage is that it’s a Lost Vape product – which means that you can rely on it to continue to achieve those great results for years to come.

So, what’s the verdict? Is the Lost Vape Therion DNA 75C truly revolutionary? This is not a vape mod for those who are new to the market, or those looking for the best e-cig to quit smoking with. You will have nothing to compare it too and not realize the true value of this mod. In some respects, this mod is revolutionary. Its look and software are certainly a step up from many other mods. Performance-wise, though, you may need to consider whether you want to pay this kind of money for a product that is anything but light-years ahead of the competition. I know that I’m buying one, but admit that I’m more drawn to the aesthetics and the brand than its actual capabilities. In the end, you’ll have to decide for yourself whether any 75-watt mod is ever worth that price.